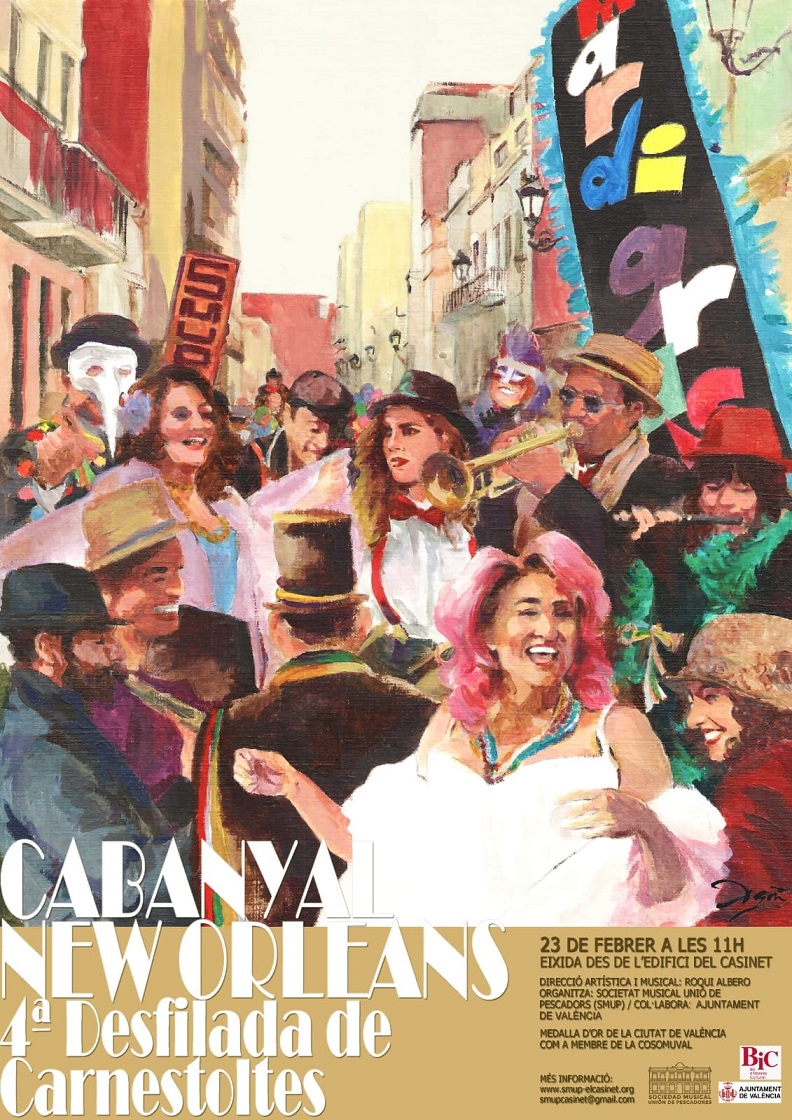 On Sunday, the 23rd of February 2020, beginning at 11:00, in the Cabanyal area, Valencia, will take place the “Cabanyal – New Orleans” Carnival.

Already at its fourth edition, the carnival aims to be a modest replica of the famous festival “Mardi Gras” from New Orleans, which takes place every February, filling the streets with music, cheer, and color.

Through the involvement of musical professionals and the neighbourhood’s inhabitants, ever since the carnival’s first edition in 2017, the organizers aimed to revitalize the Cabanyal area and at the same time, the carnival to become an emblem for the city.

Sunday, at the event, there will be attending musical bands, famous jazz performers, students and members of various maritime musical societies. Along the way, they will make various stops to encourage people to take part in the festivities, to cheer and dance.

A very short history of the carnival

The festivity is organized by Sociedad Musical Unión de Pescadores (The Musical Society of the Fishermen Union). The Union was first established in 1884 by a group of musicians that made the events of the Cabanyal neighbourhood famous for their unique atmosphere. Due to their growing success, they decided to found a musical society, called The Folk Music Council from Nuevo Mar. The Council was disbanded in the 1920s due to economic difficulties. In 1926, the musicians founded a new association with the Fishermen Union, which is known today as “The Musical Society of the Fishermen Union”.

The Casinet building was chosen as the headquarters for the Union, being one of the most emblematic buildings of the Cabanyal area.

The Cabanyal neighbourhood is an old fishing village, shored by the Mediterranean Sea, incorporated in the city of Valencia. As of a few years ago, the area is being protected and helped by the local authorities to develop its architectural and cultural characteristics.

When: Sunday, the 23rd of February 2020, 11:00 o’clock. The duration can vary depending on the number of participants.

Who: The participants can be musicians or anyone who wants to party, dressed up or not.

The instrumentalists wanting to participate can write an email at smupcasinet@gmail.com, for the organizers to send more information.

Route: The beginning point is the Casinet building, situated on Calle José Benlliure, number 272. The route length can vary depending on the number of participants.

Find out by what public means of transport you can travel across Valencia, here.

* The photo from the article is the official poster.